Flowers and herbs have played an established part in religious rites since at least Ancient Greek and Roman times.  Across different faiths there are rules when it comes to flowers, so a knowledge of the history and meanings is really useful and respectful in our modern world, and makes sense of some traditions!

For most of us the use of herbs and flowers is like a lost language.  It was something really important to our ancestors for helping with the smooth running of death! These days our knowledge is limited to things like aromatherapy oils, rosemary for stress relief and positive medicinal and psychological effects etc.  However a bit of research later and much more interesting meanings are revealed!

For the Ancient Greeks, Parsley was the most significant herb.  It was fabled that a child prince called Opheltes was left unwatched by his nurse and bitten by a snake.  Opheltes died and parsley grew from the child’s blood.  The boy was renamed Archemorus meaning the Forerunner of Death. The Greeks scattered parsley over graves or planted it on top of them.

The Romans believed fields of parsley grew on Ogygia, the death island of Calypso, and they dedicated the herb to Persephone, the Queen of the Underworld.  Parsley was widely used in wreaths that were then used to decorate the graves.  In our traditions parsley signifies good luck in the hereafter.

Rosemary is another herb that has a long rooted history in funerals.  The name itself apparently is after the Virgin Mary in remembrance.
In our folklore it is used to show friendship, purification, happiness and remembrance.  It was thrown into open graves to help the dead to find their way.  Interestingly due to it’s strong smell it helped to mask any bad smells!  It turns out that many strongly scented flowers and herbs were bound into funeral tradition just for this reason.  Rooms where the body was laid out for people to visit the departed were often decorated with plants that helped with any bad odours.

When it comes to the poetry of our lost associations with herbs and flowers, I think this passage from Shakespeare’s Hamlet really captures how entwined the meanings were with language.  This is Ophelia in her last scene of the play handing out flowers in a kind of madness:

To an absent Hamlet (who she is in unrequited love with): There’s rosemary, that’s for remembrance – pray you, love, remember.

To Laertes, her brother: And there is pansies, that’s for thoughts.

To Claudius (Second husband to Gertrude and Hamlet’s uncle): There’s fennel for you, and columbine (Aquilegia).

To Gertrude, her mother: There’s rue for you, and here’s some for me, we may call it herb of grace o’Sundays – O you must wear your rue with a difference.
There’s a daisy.  I would give you some violets but they are withered, and my father died.

The pansies for her brother, are emblems of love thoughts and of grief, for herself.  Fennel was associated with flattery, and Columbines with infidelity due to their horned shape.  So both were appropriate and powerful for her to give to Claudius who she hated.

Rue is a symbol of repentance and she calls it the ‘Herb of grace o’Sundays’ because the wearer when entering a church on that day, dipped the rue in Holy Water, which always stood within the portals, and blessed himself with it, in the hope of obtaining God’s grace or mercy. She gives it to her Mother and herself.

Daisies implied concealing or disguising a persons true feelings, and violets faithfulness, and they have withered because the queen wasn’t faithful to her late husband.  Violets were also used on the graves of children.

It shows her state of mind through the medium of herbs, and would have been readily understood by Shakespeare’s audiences.  At the time it was information that young women particularly took a great interest in, wanting to learn all the meanings.

The Victorians established customs that we still incorporate today.  The shapes and the size of their floral tributes for example are mainly unchanged – the Victorians were known for their grandeur and it was significant for them to show they were paying their respects.

Around the world however, different religions feel quite differently about floral displays.  Orthodox Jews actually forbid any flowers at funerals.  In the Hindu religion, flowers are laid at the feet of the dead by women. Gifts bought by guests to the funeral will be fruit not flowers.

The Sikh’s allow flowers to be given as gifts.  In Islam it is not considered appropriate for any flowers to be on the body of the deceased or given as gifts.  And the Chinese use white chysanthemums as a symbol of expressing grief and sorrow, however to the Americans the same flower represents happiness.
It is interesting that the colour most associated with mourning, especially in Christianity is white.  It is a symbol of the love of Christ.

To return now to the herbs and flowers and those fascinating meanings!  Here is a (not exhaustive) list of plants, which it seems to be generally accepted has been compiled by Selena Fox, titled Funeral Herbs. You can see many plants have the same meanings and recurrent properties and perhaps were selected when they were available throughout the year.  There were slightly different skews to the usage – some were for helping loved ones to cross over and be at rest, and others were protection from spirits that might cause harm.

It seems that these days the meanings of herbs seem to be bound in thoughts of witchcraft and therefore not taken seriously.  However I think our predecessors used all these wonderful plants for practical purposes such as healing, cleansing and helping the deceased to pass over.  These herbs must have helped with the grieving process and the ritual of burial.  Many being used on the body, or burned as incense to do their job.

I hope you have found this interesting and food for thought. From a florists point of view it is lovely when we have requests for herbs in our floral tributes as it just adds another layer and symbolism. So we are very happy to keep the traditions alive! 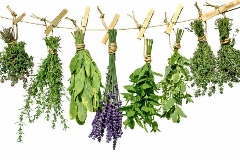 Latest Articles
What to do with flowers after a funeral
Choosing flowers for a funeral
COLOURS ARE THE SMILES OF NATURE
Why fit in when you were born to stand out....
In memory: 'Let your love grow'
It is the wound in time